"Clowns to the left of me, jokers to the right" by the Stealers Wheels was playing as I entered David Burke at Bloomingdale's.  But this sliver of a restaurant is no joke.

Stainless steel and glass counters, along with classic tunes, give this narrow space a nice vibe.  I quickly settled into my window seat with a tall pint of Brooklyn Lager ($6.50) that was perfectly chilled and set upon a huge popover laced with flecks of black pepper as I waited for my mini crab cakes ($15) to arrive.  They were definitely worth the wait; plump and juicy, and filled with large chucks of crab. Each bite providing a please-don't-let-it-end moment.  The two sauces, one tangy and another spicy, complimented the dish perfectly. Even the grilled scallions used as garnish were fantastic.

A few sips of beer later my cheeseburger ($18) arrived.  It was nice and thick topped with smoky bacon and a thick layer of oozing cheddar.   I had ordered it "medium," but sadly it was slightly overdone.  Any disappointment, however, quickly dissipated as I dug into my fries.  Tucked neatly inside a paper basket, they were piping hot and crispy, and maintained their crunch throughout the meal.  String beans, slightly blanched and sprinkled with toasted almond slices, rounded out the dish.

I was a bit stuffed at this point and skipped out on dessert even though the DBB Banana Split ($8.95) with brownie bites sounded very tempting.  There's also David Burke Cheesecake Lollipops on the menu served with bubblegum whipped cream and raspberries.

While Bloomies is certainly a shopping destination, David Burke at Bloomingdale's is an eating destination, and not necessarily just for shoppers.
Review By: Thomas Rafael 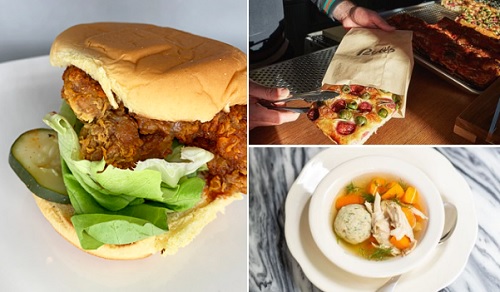