When all is said and done,  a big, juicy steak gets plenty of attention especially from the guys.  At recently opened Rocco Steakhouse in NoMad, testosterone is in abundance (although woman are more than comfortably welcomed and attended to) and meat's the thing. The inviting space has large windows facing Madison Avenue  and a good looking U-shaped bar near the entrance. Further back are dark caramel leather banquettes; throughout there is ceiling lighting setting off a neutral setting that's elegant if a bit bland but plenty clubby .The restaurant is the baby of Rocco Trotta, chairman of The LiRo Group that has lent its construction skills to various NYC projects including the High Line Park, who co-owns the spot Pete Pjetrovic, who serves as General Manager and Beverage Director Jeff Kolenovic..

Executive Chef Johnny Jevric  knows what he's doing as do the highly professional, white-aproned waiters, most of whom have worked at a top NY steakhouse for a long time.  But you don't come here  simply for smooth service --you come for steak and chops like the grand Porterhouse served for two or more, the New York Sirloin, the  handsome Ribeye or toothsome Filet Mignon. My sirloin was medium rare while my companion's was very rare as ordered, both well seasoned and gigantic.  I was tempted by the veal ossobuco that looked terrific as did the veal and lamp chops.  There are plenty of choices for non-meat eaters such as tuna steak, broiled red snapper, salmon and halibut as well as really gigantic shrimp scampi and the whopping 3 1/2 pound lobsters that needs wheels. Sides include many variants on potatoes, lobster mac-and-cheese or creamed spinach that would benefit from a little less salt.

To start there is Rocco’s Chopped Salad,  a vegi-medley of spinach, romaine, peas, corn, carrots, cucumber, hearts of palm, avocado and red cabbage; Salad Nicoise with fresh, perfectly seared tuna;  supremely fresh clams or oysters on the half shell or  that steakhouse classic, the iceberg  wedge, here smartly served with the dressing and bacon on the side so eaters can apply the desired amount.  Desserts-- key lime pie, apple strudel, pecan pie--can all be enhanced by a generous dollop of schlag.

Kolenovic 's beverage staff gets it right whether you're interested in a classic cocktail or wines from California, Australia, France and Italy as well as a special selection of Cabernet Sauvignon from the Napa Valley. The after-work bar scene is lively with folks who work in the area letting off steam.

There's a good sense of joie de vivre in the air as diners sit back and let the capable staff tend to their needs.  Everything is large and somehow grand from the high ceilings to the amount of food the kitchen sends out. Rocco offerings don't  come cheap (that ribye is $52.95) but quality is high and preparation mostly flawless.  It's a steak lover's haven with a private room seating fifty that practically yells "bachelor party." Roccos is open Monday-Thursday from 12:00 noon to 10:30 PM; Friday and Saturday from 12:00 noon to 11:00 PM and on Sundays for private events only. Dress is fairly casual during the week with a nod upwards on weekends. 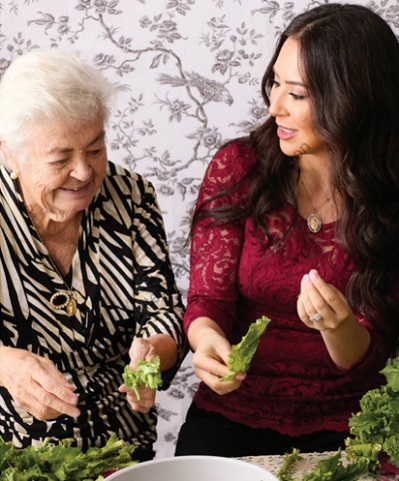